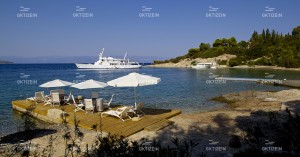 The majority of revenues of Greek luxury real estate transactions acquired by foreign nationals remain in banks outside of Greece, sources have reported.

In fact, many of the Greek sellers are even prepared to travel abroad in order to close contracts and open foreign bank accounts where they then deposit their profits. A major motivation for sellers opening bank accounts when dealing with the luxury real estate market and foreign buyers is to avoid capital controls imposed on Greek banks.

Unfortunately that means that the money spent on luxury Greek properties by foreigners never enters the Greek credit system and only some of it enters the Greek economy, but is impossible to track back to its original origin.

After the imposition of the capital controls [at end-June 2015], the cases of sellers requesting that money be deposited abroad have multiplied. Of course such transactions are entirely legitimate and taxed in Greece, but the revenues remain in other countries.