MVRDV selected by the Port of Thessaloniki to revitalise the waterfront 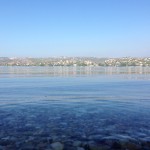 The Port of Thessaloniki has commissioned MVRDV to lead the evolution of the eastern part of the Greek city’s port into a modern urban environment and a multi-character major hub. The project, which will be MVRDV’s first in Greece, aims to raise the international profile of Thessaloniki and enable it to compete on the world stage.

As Greece’s second-largest city and the capital of the country’s region of Macedonia, Thessaloniki has historically been an important crossroads between the Balkan states, the Aegean Sea, the Mediterranean, and the Middle East. As the central element of these connections, modernising and improving the Waterfront will be key in strengthening the city’s reputation.

MVRDV’s proposed approach to the design is an adaptive and iterative process that will define then refine the project’s goals, vision, and plan as the design progresses. This will have the effect of fostering the port-city relationship and defining the future identity of the area, with the team proposing to look at the site’s potential under different scenarios focusing on nature, recreation, culture, education, among others.

“The ambition of the project team is inspiring – effectively, what they are asking is to set the stage for a ‘Bilbao effect’ in Thessaloniki,” says Winy Maas, founding partner of MVRDV. “

This refers of course to the Bilbao Guggenheim, but what is often overlooked is that this museum was only the most visible and spectacular part of a much broader city revitalization program including the restoration and reallocation of the richly present historical heritage, the reduction of the role of the car in the city, and the reorganization of public transport. Many of the same things are happening in Thessaloniki – so we believe it’s the perfect time to look for the role of the Port in the Thessaloniki effect.”

To ensure this holistic approach is achieved to the highest possible standards, MVRDV has assembled an international team of experts to address every aspect of this design challenge.  We are working together with Deda & Architects and Andreas Savvidis as architect consultant. Rotterdam-based Rebel Group, Stuttgart-based Drees & Sommer, London-based firm WSP, Athens-based Enveco, and Thessaloniki-based consultant Maria Sitzoglou will also participate in the project, providing support in various aspects.